One of the end time prophecies described by the Prophet Daniel is the unveiling of the deceptive peace treaty that the Antichrist will force Israel to sign. The treaty will promise calm, but after three and a half years, the Man of Lawlessness will use it as a pretext to invade Israel. Isaiah warns this accord will be grounded in a lie and will guarantee war because it is a covenant with death.

We have made a covenant with death,

And with Sheol we are in agreement…

For we have made lies our refuge,

And under falsehood we have hidden ourselves

The goal of the Antichrist armies will be to capture Jerusalem and establish an Antichrist presence in the restored Third Temple on the Temple Mount. The Lord Jesus Christ warned of this when He spoke of an ‘Abomination of Desolation,’ standing in the holy place at the Temple. Daniel explains that this treaty lasts one week; in his symbolism, one day represents one year. Thus, in the middle of the seven year Tribulation period, the Antichrist will capture the Third Temple and end sacrifices.

Then he shall confirm a covenant with many for one week;

But in the middle of the week

He shall bring an end to sacrifice and offering.

And on the wing of abominations shall be one who makes desolate,

Even until the consummation, which is determined,

is poured out on the desolate

Jesus explains the unveiling of the ‘Abomination of Desolation in the Temple of Jerusalem will mark the beginning of the second half of the Tribulation period, as the situation grows far worse. The Lord reveals the Jews will have to flee, but God will bless and protect many.

Jesus said, “Therefore, when you see the ‘Abomination of Desolation,’ spoken of by Daniel the prophet, standing in the holy place” (whoever reads, let him understand), “then let those who are in Judea flee to the mountains. Let him who is on the housetop not go down to take anything out of his house. And let him who is in the field not go back to get his clothes. But woe to those who are pregnant and to those who are nursing babies in those days! And pray that your flight may not be in winter or on the Sabbath. For then there will be great Tribulation, such as has not been since the beginning of the world until this time, no, nor ever shall be. And unless those days were shortened, no flesh would be saved; but for the elect’s sake those days will be shortened 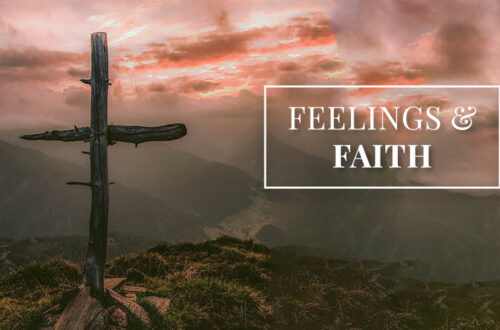