– The Holy Spirit in a Man by R.B. Watchman

Night after night I cried out, “There has to be more!” The answer to my persistent prayers, seeking God came through a book called Rees Howells Intercessor by Norman Grubb (1952). Upon finishing the book, I prayed, “My Lord and My God, this is it. My search is over. There is more!”

This book contained the testimony of a man – Rees Howells – who had what I was looking for. The reality of living the Bible life today and witnessing God’s power at work. The book describes the work achieved when the Holy Spirit began working in and through an individual, later a small company of believers and then a whole fellowship of disciples. I could not put Rees Howells’ biography down and read it from cover to cover, repeatedly.

Rees Howells, who went to be with God in 1950, was used by God to transform a village, minister healings, carry revival and in world-changing powerful intercession. As I read about his life, I knew that the offer God gave to Rees Howells – of complete surrender and to truly be filled with the Holy Spirit – was an offer God gives to all people.

The Holy Spirit lived through Rees Howells because he gave God permission to live His Divine life through His surrendered vessel and the Lord wants this kind of life for all believers!

I have been crucified with Christ; it is no longer I who live, but Christ lives in me; and the life which I now live in the flesh I live by faith in the Son of God, who loved me and gave Himself for me

Years later, I was thrilled to visit Rees Howells’ Derwen Fawr Estate in Swansea, South Wales, UK, where Rees used to live and where his son, Samuel Rees Howells was continuing the ministry of worldwide intercession.

This is an excerpt from the book The Holy Spirit in a Man by R. B. Watchman and is used by permission.

On my first day at Rees Howells’ College, I met Peggy Coulthard, who I believe was in her seventies. She walked across the Prayer Room in Derwen Fawr House smiling at me and clasped my hands, looked me straight in the eye and said, “Here stands a man that God can use.” I was speechless.

After all these years, my prayers had been answered. Stood before me was a woman full of the Holy Spirit. When she smiled, I could have been forgiven for thinking that she was a teenager. Eventually I said with emotion in my voice, “You are an answer to my prayers.” She smiled gracefully and said, “It’s not me, it’s the Lord you see.” In the book Samuel, Son and Successor of Rees Howells by Richard Maton (2012), there is a photo of Peggy Coulthard with Reinhard Bonnke of CFaN.

Peggy Coulthard took me by the hand and led me to meet the other ladies, all who had been intercessors with Rees Howells, and with his son Samuel. We had sweet fellowship. Rees Howells had trained this team of intercessors I was meeting, who had prayed through with him to victory during international crises’ leading up to the war, from 1936 and all the major battles of World War II (1939-1945) and beyond! These were men and women who knew what it meant to intercede and see the world bending to the prayers given by the Holy Spirit!

During my first visit to Rees Howells’ College, I was present when Dr Priddy, a close friend of Rees Howells, led the College to pray during the Gulf War of 1990-1991. Saddam Hussein’s army invaded Kuwait and the College was given specific prayers to plead before the throne of God. This conflict, like all conflicts, has deep spiritual roots.

Dr Priddy, whilst leading the meeting quoted from Rees Howells’ journals from World War II, telling his audience, including all the elderly ladies I had been speaking with, that they should pray as they had back then, for the allied forces to have a minimum of casualties. Their prayers were answered and the story is told in the book Samuel Rees Howells: A Life of Intercession by Richard Maton (2012).

My friend at the College also introduced me to one of the gardeners who shared with me how he received a baptism of love some years before. “Do you mean the baptism of the Holy Spirit?” I inquired. “No,” he replied, “this is something quite different.” This was something new, which I had never heard of before. I thought about it and believed it to be real. Later I found it was Scriptural and prayed to receive it myself, and I did. Praise God!

My time at the College was sweet and the last night before we set out on our mission trip, we attended an induction service for an Indian student to become a local pastor in Wales. Peggy informed me that the Holy Spirit told her that I was to accompany her and two of the other ladies, to sit with them during the service. They explained this church could not afford to pay the pastor a wage, so he would live by faith, just as Rees Howells and his staff had and still were.

Early the next morning, the Holy Spirit told me to place £100 ($160) in an envelope and give it to this new pastor. As I walked across the grounds of the College, I saw him and he walked over, saying, “The Holy Spirit told me to give you a blessing towards your work. I’m sorry it’s not a lot, but it is all I have.” Wrapped in a piece of brown paper was £1 ($1.60). This was his first day as an unpaid pastor and he was called to give all the money he had to me! His gift reminded me of the widow’s mite (Luke 21:1-4), but in return he received a hundredfold, just as Jesus said he would (Matthew 19:29). I shall always cherish those times at the College, especially with the elderly ladies.

The most important ministry of Rees Howells’ life was Holy Spirit led intercession. Rees Howells received the Every Creature Vision – of reaching every person with the gospel – in the front room of Derwen Fawr House on Boxing Day, 26 December 1934. He explained that if the staff responded to the Holy Spirit’s call, all who accepted would be bondservants for the rest of their lives to this one task – to intercede for every creature to hear the gospel, to serve those who went as missionaries and to forever carry this living burden.

Intercession, for Rees Howells and the team he led, was not ritualised prayer with little meaning, but it was targeted and specific as they abided in the Vine (John 15:1-11). They were led by the Holy Spirit to intercede on national and international levels concerning any situation which affected world evangelisation.

As every creature had to hear the gospel, the doors had to be opened and kept open. In world events, their prayers became strategic and defined. Wherever the enemy used rogue governments or dictators to oppose the freedom to share the gospel with the unsaved, they had to intercede and become an army fighting on their knees in spiritual battles.

They were to wrestle, not against flesh or blood, but against spiritual powers of darkness, principalities, powers, rulers of evil darkness and the host of demonic powers in the heavenlies. Paul used the word ‘wrestle’ because spiritual warfare can be a long drawn out battle of strengths between the Holy Spirit in His intercessors and the demonic strongholds who resist (Ephesians 6:12-13). Victory belongs to Christ, but the battle continues.

At this College, Rees Howells, his son Samuel and over one hundred others, all became channels that the Holy Spirit entered to fight the devil’s schemes in Holy Spirit led intercessory prayer. Rees and his team of intercessors fully understood this and went to war daily, on their knees. Led by the Holy Spirit they fasted, prayed and interceded, to bind the strong man and pull down his strongholds, releasing angelic forces to do battle with the principalities and powers of darkness (Daniel 10).

Over the following years, I would visit Rees Howells’ College from time to time and sat at their feet, to listen and learn about the cost of spiritual warfare, and see what it meant to live as a temple of the Holy Spirit. For me, these times were priceless. This is an excerpt from the book The Holy Spirit in a Man by R. B. Watchman and is used by permission. 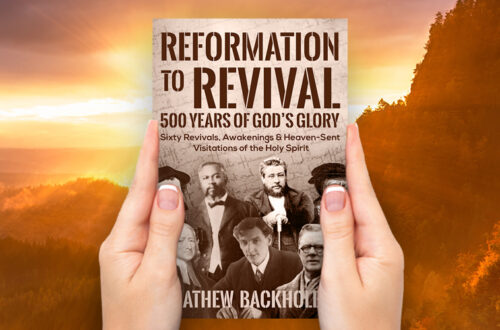 The Cost of Living Crisis: Living on Debt and Money Printing Never Works

Mental Health and the Struggle for Peace in Your Mind