What’s the point of living? Should I abide in self-pity when all my plans go wrong? Is money the answer? How do you build a civilisation? Why believe in God? Is the Bible worth studying? These are the questions raised by Daniel Defoe’s Robinson Crusoe, published in 1719.

The story of Robinson Crusoe is profound and based upon the true story of a Scot, Alexander Selkirk, who was marooned for years on a Pacific Island in 1704. Evidence exists to support Selkirk’s testimony and the remains of his nautical instrument have been found on the island. Alexander found spiritual comfort by trusting in God and reading Scripture:

Do not forsake me, O Lord; O my God, be not far from me

Robinson Crusoe begins as a young, rebellious adventurer off to amass his fortune. He decides the purpose of life is to pursue self-worth by exchanging his most valuable gift – time – for possessions and prestige. But in pursuit of money and a name for himself, he is captured and becomes a slave in North Africa. After suffering he escapes, making a success of himself and tragedy strikes again, when he is shipwrecked on a desert island.

The story of his isolation is fascinating. How does one build a modern civilisation where none exists? How can one transcend the life of a hunter-gatherer? The book is part philosophy (what’s the point?), theology (what do you want from me God?), agricultural (how does one grow anything?), farming (can I breed livestock?), cognitive development (learning to think positively about your lot), addressing social anxiety (I’ve been alone for years), questions about the use of force (should I free the enslaved?), understanding others (Friday is the same as me), the horror of conquest (Spanish cruelty in South America) and hope.

Crusoe’s spiritual development mirrors that of the real Robinson Crusoe. He begins with no thought of God and gradually finds He is the only thing worth living for.

No Time For God

I had hitherto acted upon no religious foundation at all; indeed, I had very few notions of religion in my head, or had entertained any sense of anything that had befallen me otherwise than as a chance, or as we lightly say, what pleases God; without so much as inquiring into the end of Providence in these things, or His order in governing events in the world.

July 4. In the morning I took the Bible; and beginning at the new Testament, I began seriously to read it, and imposed upon myself to read awhile every morning and every night, not tying myself to the number of chapters, but as long as my thoughts should engage me.

This was the first time that I could say, in the true sense of the words, that I prayed in all my life; for now I prayed with a sense of my condition, and with a true Scripture view of hope founded on the encouragement of the Word of God; and from this time, I may say, I began to have hope that God would hear me.

I had been on shore three hundred and sixty-five days. I kept this day as a solemn fast, setting it apart to religious exercise, prostrating myself on the ground with the most serious humiliation, confessing my sins to God, acknowledging His righteous judgments upon me, and praying to Him to have mercy on me through Jesus Christ.

Inspiration from the Bible

But now I began to exercise myself with new thoughts. I daily read the Word of God, and applied all the comforts of it to my present state. One morning, being very sad, I opened the Bible upon these words, “I will never, never leave thee, nor forsake thee.” Immediately it occurred that these words were to me; why else should they be directed in such a manner, just at the moment when I was mourning over my condition, as one forsake of God and man?

I began to conclude in my mind that it was possible for me to be more happy in this forsaken solitary condition, that it was probable I should ever have been in any other particular state in the world.

In my book How Christianity Made the Modern World, I state: ‘Daniel Defoe is generally considered to be England’s first true novelist…many have called Defoe The Father of Modern Journalism because his dedication to truth and willingness to suffer for the sake of free speech, gave him a loyal following and loyal enemies. His most famous work was inspired by a real life story of a man abandoned on the Pacific Island of Aguas Buenas, who spent time ‘reading the Bible and singing Psalms, and enjoyed a more peaceful and devout existence than at any other time in his life.’

Robinson Crusoe is a captivating read. Defoe studies human nature and explores its depth with wonder. At a four hour read, the book begins with excitement, then drags a little with the minuscule details of life on the island, with repetition and then thrills with wonder. I’ve found over 160 references to God, Heaven, Providence and theological thought.

The book is credited as the genesis of realistic fiction as a literary genre. Having been lost in the jungles once and struggled to survive, I feel connected to his questions of how can one secure food, shelter and water in such a place. His deeper message is one of faith. If you find Christ, you find something that transcends this life.

I will never leave you nor forsake you

ByFaith Media is now on TikTok!

Why Believing in God Makes Sense 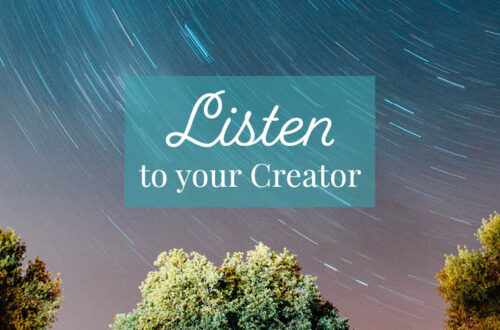 Listen to Your Creator, not Your Critics: They’ve Dismissed You, God Hasn’t