Who may ascend into the hill of the Lord? Or who may stand in His holy place? He who has clean hands and a pure heart, who has not lifted up his soul to an idol, nor sworn deceitfully. He shall receive blessing from the Lord and righteousness from the God of his salvation. This is Jacob, the generation of those who seek Him, who seek Your face

As a nation, if we returned to God, our lives and our communities would be better. In fact, through repentance and prayer society as a whole would be transformed. If one household can be revived and live the Christian life at home and in the workplace, then why not another? Whilst some people will always reject the good and correct way, the power of God can touch the worst sinner and bring them up from the darkness into His marvellous light; from the power of Satan to God. Did not persecuting Saul after meeting the Risen Christ later become the Apostle Paul?

The Bible reveals, ‘The king’s heart is in the hand of the Lord, like the rivers of water; He turns it wherever He wishes’ (Proverbs 21:1). Are you praying for those in authority, as well as those who are closer to home?

‘I exhort first of all that supplications, prayers, intercessions and giving of thanks be made for all men, for kings and all who are in authority, that we may lead a quiet and peaceable life in all godliness and reverence. For this is good and acceptable in the sight of God our Saviour, who desires all men to be saved and to come to the knowledge of the truth’ (1 Timothy 2:1-4).

‘Righteousness exalts a nation, but sin is a reproach to any people’ (Proverbs 14:34). ‘By the blessing of the upright the city is exalted, but it is overthrown by the mouth of the wicked’ (Proverbs 11:11).

11. Do we Embrace Justice and Order or Lies and Deceit?

‘Justice is turned back and righteousness stand afar off; for truth is fallen in the street, and equity cannot enter. So truth fails and he who departs from evil makes himself a prey’ (Isaiah 59:14-15). For most people, there is no moral absolute, no conclusive right from wrong. As in the days of the Judges of Israel, everyone does what is right in their own eyes (Judges 21:25).

Those who try to live by the rules of God are often mocked, sometimes denounced as bigots or other derogatory terms are thrown at them; sometimes they are attacked. Christians are not against the person, but the acts of sin because the Bible condemns it and sin separates us from God.

Some people demonstrate or berate the views of others in the name of tolerance whilst being intolerant themselves! Often those who accuse Christians of being bigots are THE bigots as they have no tolerance of the views of others. Believers are merely stating their Biblical stance – from the viewpoint of the Creator, God Himself. The opinions of the true bigots, the snowflakes and the wokes often change to suit their whimsical, none accountable hypocritical lifestyle and actions. These are people who are blown this way and that by the fashion of words and society. What they embrace in one season they reject in another, as they try to be all things to all people, without offence, yet give no thought for their offence toward Christianity, Christians and toward God!

12. Are Bribes Still being Given and Taken?

The Bible reveals: ‘Cursed is the one who takes a bribe to slay an innocent person’ (Deuteronomy 27:25). This may be uncommon in Western nations, but how many bribes are given in the name of large political donations, lobbyists, entertaining or trips abroad on ‘fact-finding travels?’ What about premium tickets for the theatre, soccer match or Super Bowl, or minimal fee long-term vehicle rental? In these cases, people are given something and something is wanted in return. If the gift turns your attention or allegiance from the rules of Christ to the rule of man, then something is seriously wrong. You cannot promote or be a spokesperson for sin.

‘Come now, you who say, “Today or tomorrow we will go to such and such a city, spend a year there, buy and sell, and make a profit,” whereas you do not know what will happen tomorrow. For what is your life? It is even a vapour that appears for a little time and then vanishes away’ (James 4:13-14).

13. Is Society Wise or Foolish?

“How can you say, ‘We are wise and the law of the Lord is with us?’ Look, the false pen of the scribe certainly works falsehood. The wise men are ashamed, they are dismayed and taken. Behold, they have rejected the word of the Lord; so what wisdom do they have?” (Jeremiah 8:8-9).

‘Who is wise? Let him understand these things. Who is prudent? Let him know them. For the ways of the Lord are right; the righteous walk in them, but transgressors stumble in them’ (Hosea 14:9).

14. Should the Wicked/Evil Person Quote the Bible?

The wicked have NO right to quote God’s laws and statutes as they ignore them. They hate instruction, cast God’s Word behind their back, carry on in sin and consent with others who commit sin. God will rebuke them! ‘To the wicked God says, “What right have you to declare My statutes, or take My covenant in your mouth, seeing you hate instruction and cast My words behind you? When you saw a thief, you consented with him and have been a partaker with adulterers. You give your mouth to evil and your tongue frames deceit. You sit and speak against your brother; you slander your own mother’s son. These things you have done and I kept silent; you thought that I was altogether like you; but I will rebuke you and set them in order before your eyes” ’ (Psalm 50:16-21).

In addition, ‘One who turns away his ear from hearing the law, even his prayer is an abomination’ (Proverbs 28:10). ‘…Those who approve of those who practice them [sinful acts and attitudes, Romans 1:29-31]’ will receive the judgment of God! (Romans 1:22-32). They have ‘exchanged the truth of God for the lie and worshipped and served the creature rather than the Creator’ (Romans 1:25).

15. Are the Wicked on a Slippery Slope?

Job spoke about the wicked, who like all other people can die at any moment and meet their Maker: “Yet they say to God, ‘Depart from us, for we do not desire the knowledge of Your ways. Who is the Almighty that we should serve Him? And what profit do we have if we pray to Him?’ ” (Job 21:14-15). The psalmist noted how the enemies of God blaspheme: ‘For they speak against You wickedly; Your enemies take Your name in vain’ (Psalm 139:20).

‘Isaac dug again the wells of water which they had dug in the days of Abraham his father, for the Philistines had stopped them up after the death of Abraham. He called them by the names which his father had called them’ (Genesis 26:18).

Society Needs God, Part 4. Will the City be Overthrown or Saved?

Mathew Backholer is a revival historian, author and TV presenter. If you want to know more, you can find his books or watch his programmes on streaming services, etc. 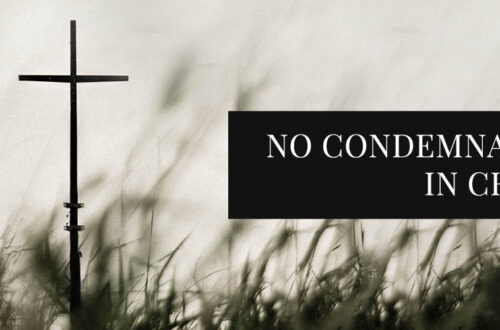 There’s No Condemnation In Christ Jesus